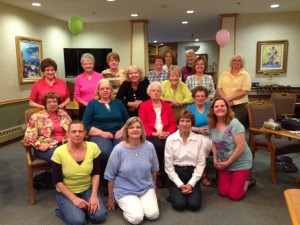 The Algona branch of AAUW was formed in 1969 after Helen Kelley talked to local women about organizing a branch.  Elections were held for the first time in September of 1969.  Helen Kelley was elected President, First Vice-President for Membership was Lorraine Smith, Second Vice-President for Programs was Marianne Chalstrom, Secretary Dorothy Campney, and Treasurer Marion Ferris.

The local branch has been recognized through awards and is actively involved in the community through giving scholarships, and sponsoring many programs, events and seminars since 1969.

In 1973, the Florence Call Cowles Fellowship Endowment was created through a gift of $100,000 made by Mr. and Mrs. John Cowles as a memorial to Mr. Cowles’ mother, born in Algona. This gift was given through the Algona Branch to the AAUW Educational Foundation.

In 1977, the Kossuth County Department of Social Serivces approached local AAUW members about helping to educate the public about child abuse.  Members responded to that request by working with others to form the Child Assistance Resource and Education (C.A.R.E. Team). AAUW members Betty Schutter and Trudy Kattner became the first President and Vice President of the C.A.R.E. Team board.  Other members continue to serve on the C.A.R.E. Team board of directors.

Mary Grefe, who was originally from Algona, was National President of the organization from 1979 to 1981.

In 1982, Algona’s AAUW sponsored a visit for teachers from Ghana and Sierra Leone.  Two teachers from those countries visited schools in Algona and Burt.

In 1997, AAUW Algona held a meeting in conjunction with the Iowa Commission on the Status of Women to determine what services were needed in the Algona area.  The most important issue that was raised at that meeting was the need for help for adult victims of domestic violence and sexual assault. At that time, there were no local services available.  As a result of that meeting, one of our members, Maranna Sarazine, agreed to act as chairman of a steering committee, which eventually led to establishing a women’s crisis center in Algona.  This involved garnering support from various community groups, including local law enforcement, department of social services, obtaining legal representation, and then coordinating meetings and finally, forming a board.  Funding was obtained through grants and donations, staff hired, and a house was purchased to use as a safe house.  In recent years, the Women’s Crisis Center merged with other organizations in an eight county area to form the Crisis Intervention Service.  A local women’s advocate is still available 24 hours a day, however local housing is not.  Our organization is proud to have been instrumental in the support of this critical service to women in our area.  Maryanna Sarazine continues to serve victims of sexual assault and domestic violence through her work on the board of that organization.  Members of the branch have supported this project through donations of money and other needed supplies.

The branch sponsored a North Thorington Street Walking Tour during Founder’s Day weekend in 2002, followed by the All Around the Town Walking Tour, also held during Founder’s Day weekend in 2003.  In 2003, AAUW Algona was named a Gold Branch Winner in the 21st Century Recognition program sponsored by AAUW.  The program encourages local branches to work on local projects in coalitions with other organizations.

In  2009, the Algona branch of AAUW hosted a community meeting featuring the former Lt. Governor Sally Pederson, who spoke on behalf of the Iowa Initiative and its effort to reduce the number of unintended pregnancies among women 18-30 in Iowa.

In 2009 and 2010, the Algona branch sponsored activities for Equal Pay Day in April to promote awareness of the gap between salaries earned by men and women with the same level of education.  Equal Pay Day is around April 20 each year, and reminds us that in 16 months women earn what men of similar education earn in 12 months.  In 2015, our branch collected donations of grooming items for the food pantry, and collected signatures for petitions to members of congress, asking for their support for the Paycheck Fairness Act.

Further benefits to the community include the scholarships for senior girls from Algona High School and Bishop Garrigan High School who will start college in the fall, and for a female Iowa Lakes Community College student attending the Algona campus.  They provide a good source of inexpensive books through a fall fundraiser.

Algona’s members created the Women’s Networking event, which is now an annual event sponsored by Algona Chamber of Commerce, and Algona AAUW members conceived the idea for the Heritage Award which is now awarded jointly by several local organizations.  They also promoted the idea of a women’s shelter in Algona, now run by the Crisis Intervention Service.

AAUW encourages women to consider careers in math and science, and every year we honor 8th grade girls who excel in these subjects.